Interested in taking part in this writing session? Visit

Use the photo and first line to write using up to 150 words. 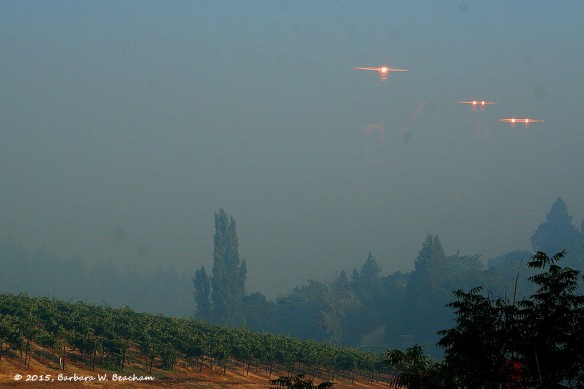 Finish the story begins with: “On March 9th, 2015, three objects were reportedly seen in the skies over the Borracho Todos los Tiempos Vineyards.”

“They are here! Wake up!” whispers Clive.

No answer from his mate Sonny. “Sonny, do you see them? Wake up!” Still no reaction.

Clive was sure it was his friend Joe. Joe  kept on telling them that he would come and pick them up and take them for a ride in his aeroplane.

“How come there are so many lights? Joe did not say he had five planes” Clive thought.

He could not hear anything, could only see the lights. Sonny did not want to wake up because he had a lovely night out here in the vineyard. “Sonny wake up, the police are coming!” shouted Clive. In a flash Sonny jumped up shouting: “Where, where, it wasn’t me”

When he saw the lights he was wide awake running for his life. This happens when you booz too much here between the vines of  Borracho Todos los Tiempos. (151 words)

17 responses to “Mondays Finish the Story”