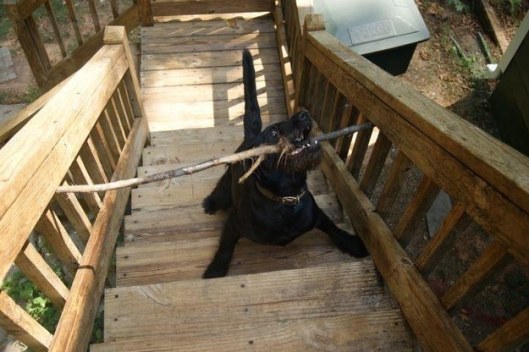 Rover thought: “ Those humans think they know what brute force is! I’ll show them something today.”

Rover was a placid loving black dog. He loved to run around chasing birds and sometimes stray cats too. His master liked to take him out for long walks. Rover hated one thing. He hated it when his master grabbed a stick and shouted at him: Fetch Rover, fetch. Then the next command: Bring Rover Bring.

One day Rover’s master was lazy. He stayed on the veranda and threw the stick.

Rover thought : Grrr I hate this.  He charged after the stick. Grabbed it and ran back. Running up the stairs Rover got caught by the rails.  He tried to force his way up with no avail. The more Rover growled the less he could go forward. He was so angry that suddenly pushed so hard  the stick snapped and he could reach the top. Wagging his tail Rover threw both pieces in front of his master.